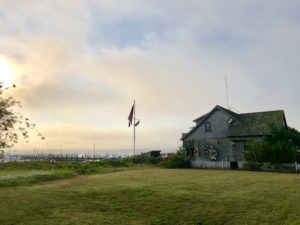 Nantucket in a Nutshell

From the bluff at Sankaty Head in Siasconset, looking eastward straight across the Atlantic Ocean to Spain, it is not difficult to imagine a late summer’s day in the year 1602 and in the mind’s eyesight the bark Concord, under the command of Bartholomew Gosnold, tacking alongshore. The vessel had embarked from Falmouth, England, and having passed around Cape Cod was bound for the Virginia colony; Gosnold did not go ashore, but was the first to chart the island’s location, a remote remnant of “the glacier’s gift.”

For the next several decades Nantucket would continue to be populated solely by some 3000 natives of the Wampanoag tribe whose subsistence depended on what they could grow, hunt down, or take from the ponds and shorelines. There would be no incursion of Englishmen until 1641, when the island was deeded by the authorities then in control of all lands between Cape Cod and the Hudson River to Thomas Mayhew and his son, also Thomas, merchants of Watertown and Martha’s Vineyard. From their base on Martha’s Vineyard, the Mayhews not only grazed sheep on Nantucket but had zealously Christianized much of the native population, who would come to be known as praying Indians. Now the Mayhews owned the island and would hold onto it until 1659 when they sold it to nine solid citizens from the Merrimack Valley who were seeking to improve their circumstances; among them were Tristram Coffin, Thomas Macy, Christopher Hussey, and Richard Swain, whose names would resonate throughout Nantucket’s history. The Nantucket Historical Association. a contemporary true copy of the purchase agreement suggests that it may have been Thomas Macy’s occupation as a merchant and clothier that prompted Mayhew senior to include in the purchase price of thirty pounds sterling .also two beaver hats one for myself and one for my wife.

Although the purchase of Nantucket from the Mayhews was primarily a business venture, the first settlers. especially Thomas Macy, who had had a doctrinal run-in with the town fathers in Salisbury. wished to extricate themselves from the increasingly repressive conditions being imposed by the Puritans of the Massachusetts Bay Colony. Thus, in the late fall of 1659, the Macy family, with several neighbors and friends, twelve people in all, sailed in a small boat bound for Nantucket, rounding the hook of Cape Cod where even today sailors keep a weather eye for shifting winds and rough waters, at last coming ashore at the west end of the island. Fortunately for the settlers, the Wampanoags were friendly and had it not been for their hospitable succor during the long cold winter at Madaket the newcomers might have starved or frozen to death. It would be a long time before those hardy souls would be followed in sufficient numbers to form a community. By 1700, only about 300 white people and 800 Indians were living peacefully with one another, though the native population had been decimated by diseases introduced by the Europeans.

Nantucket – along with Martha’s Vineyard and the Elizabeth Islands, was attached to the New York colony until 1692, when by act of Parliament it became a part of the Bay Colony of Massachusetts. The first town, established around a natural harbor on the north shore, was called Sherburne, but that harbor silted up and by the end of the eighteenth century the houses, businesses, and most of the citizenry had moved eastward to the Great Harbor, where it stands today. In 1795 the town was named Nantucket.

Conquering the “Watery World”
Beginning with the English settlement, the faraway land, as Nantucket is translated in the Wampanoag language, developed into a community of small farmers and sheepherders (the manufacture of wool was a vital industry in colonial New England). In addition to farming the land and hunting small game, the natives and the newcomers took sustenance from the waters surrounding Nantucket, in which varieties of finfish, particularly cod, and shellfish abounded. Species of small whales occasionally washed ashore and were prized for their oil, but by the 1690s the Nantucketers had begun to organize expeditions in small boats to pursue the “right” whales, so-called because they were of moderate size and slow-moving and therefore easy to catch that passed close to shore on their annual migrations. Whale houses with elevated platforms were established along the south shore, and when the spouting whales were spotted the boats set off through the pounding surf to capture them. They were towed to shore and the carcasses stripped of the blubber that would be tried out. to extract the valuable oil.

Deep-sea whaling began around 1715, a few years after the first sperm whale had been taken by a sloop blown out to sea in a gale. Oil from the “head matter” of this gigantic creature was found to be of a quantity and quality unmatched by any natural or manmade product then available. But the great sperm whale inhabited the deepest parts of the oceans, so Nantucket men began to make offshore voyages of fifty miles and more but needed to be within reach of shore to off-load their catch and have it processed. By the mid-eighteenth century, larger whaleships were being built and became seagoing factories, with all the equipment needed to extract and store huge quantities of oil. For the next hundred years, Nantucket whaleships would traverse the oceans of the world on their legendary three-, four-, and five-year voyages in search of “greasy luck.”

Back on the island, the economy was centered on the whale fishery, with ropewalks, cooperages, blacksmith and boatbuilding shops, ship chandleries, sail lofts, and warehouses. Supporting businesses such as seamen’s boarding houses, grog shops, clothing shops, purveyors of groceries and dry goods sprang up. When the whaleships came back to port, their precious cargo was sold at great profit to mainland refineries for use in domestic lamps and street lights and for myriad industrial uses. Candles made from the solid spermaceti wax derived from the head matter were the finest household illuminants yet known and were produced in enormous quantities on the island, accounting for some of the impressive fortunes amassed in the industry. The town was a bustling, vital, commercial center, the sleek vessels of the China trade bringing home porcelains and silks and exotic artifacts, items that found a ready market among the islands prosperous families. For almost a century and a half, from the early 1700s to the late 1830s, Nantucket was the whaling capital of the world. As Melville wrote in Moby-Dick: “Thus have these . . . Nantucketers overrun and conquered the watery world like so many Alexanders.”

Throughout that period the island’s political, economic, and religious leadership was dominated by the Religious Society of Friends – the Quakers. Their experience of persecution, in England, to begin with, and subsequently in the New World, led them to Nantucket’s shores, where although they were not welcomed with open arms they were at least tolerated. By the turn of the eighteenth century the Friends, according to one historian, .had secured a hold upon the islanders such as no other religious denomination had ever acquired.. Their rejection of worldliness, their spurning of adornment, and their lack of sympathy for anything calculated to make earthly life happy or even pleasant did not prevent them from having an astute business sense; many of Nantucket’s first families: the Starbucks, Barneys, Coffins, Macys, Folgers, Gardners, Husseys, Colemans, Worths. Quakers all would be pre-eminent in the conduct of the whaling industry.

Greasy Luck Runs Out
The palmy days would not last. A series of events over a period of about thirty years would see the “Nation of Nantucket,” as it was dubbed by Ralph Waldo Emerson, brought to its knees. In the 1830s the petroleum fields of Pennsylvania were producing kerosene, cheaper and more easily obtainable than the liquid gold the whalers pursued. A devastating fire, the Great Fire of 1846, roared through the night, leaving the town a smoldering ruin and a hundred families homeless and destitute. The years-long whaling voyages were horrendously costly and the whaling grounds had been overfished. A sandbar at the entrance to Nantucket’s magnificent harbor prevented the much larger and heavily loaded whaleships from approaching the wharves, and they had to be off-loaded outside the bar or carried over it in an ingenious floating drydock called the “camels.” The mainland ports of New Bedford and Salem had access to the burgeoning railroads. Gold was discovered in California and hundreds of Nantucket men went there to seek their fortunes in the earth as they had been sought in the sea. The Civil War would strike the final blow: almost 400 Nantucket men took up the Union cause, seventy-three of them losing their lives. Their families on Nantucket, with no economic infrastructure in place, would have hard times. The once-bustling waterfront was filled with rotting hulks; there was no industry that could succeed or replace the whale fishery. Between 1840 and 1870 the population of Nantucket decreased from almost ten thousand to a little more than four thousand.

The demise of whaling coincided almost exactly with the dwindling influence of the Society of Friends. Torn apart by decades of factionalism, the Quakers faded out of the picture, leaving as a heritage the pristine little town – and, of course, two centuries of dynamic history.

Nantucket Redux
The summer visitor would be the catalyst for Nantucket’s recovery. As early as 1828, island entrepreneurs were touting .the necessary, invigorating, and delightful indulgence of Sea Bathing. By 1845 several large hostelries had been established, and that summer the editor of the Nantucket Inquirer wrote “We see by the papers that Nantucket is becoming quite a fashionable place . . . and that a larger number than usua.l have resorted to the island the present season, in quest of health or pleasure. . . . If suitable accommodations were provided, both in town and at Siasconset, [the island] would take a prominent station among the watering places, which collect their crowds during the summer months.”

The selling of Nantucket began in a big way in the 1870s. Mainland newspapers carried advertisements for the big hotels, several of them still here today. Respected monthly magazines of the day – Scribner’s, Harper’s, Lippincott’s – sang the praises of the faraway island in lengthy feature articles. The war behind them, Nantucket women opened their homes to summer boarders, providing “large airy rooms” and “nicely cooked bluefish” as attractions. The town got behind the effort, advertising “two boats a day” and printing a flyer titled “Nantucket Island, An Ideal Health and Vacation Resort.” The Season was created, and Nantucket has never looked back.

Now one of the most popular and attractive destinations in the world, Melville’s little “elbow of sand” has become a new Nation of Nantucket, unparalleled in the distinction of its architecture and its historical ambiance. Reprinted from “Historic Nantucket,” Winter 2000, Vol. 49, No. 1, by permission of the Nantucket Historical Association.